Puzhukku is a  dish made of  boiled/steamed  root vegetables flavored with seasoned  coconut paste. Thiruvathira Puzhukku is such a healthy dish made with a mix of different seasonal tubers and beans.

Thiruvathira  Puzhukku is made with a mix of root vegetables and beans that are in season.   The tubers  are nutritious  and  filling  while the beans provide a good source of protein. This makes it for the ladies  who forgo rice  based meals as part of  the  Thiruvathira  rituals.

Shiva,  of  Hindu  mythology.  It is  celebrated on the  Thiruvathira  day  in  the  Month of Dhanu, according  to the  traditional  Kerala calendar.  This  day falls in the  month of Dec/Jan.  It  is  one  of  the  coldest  days  of  the  season.  What  better  way to celebrate  the  winter than by going  for  a  dip  in the  river   early in the morning,  fasting  and staying  up all night ? Women  follow  these  traditions  and rituals   believing  that  it  aids the well being of  the menfolk. If you are interested to find  out  more  about the festival  click here.

To be  honest   this  is  was kind  of  an exciting  celebration  while  I was growing  up –   the  rare opportunity to  stay up all night in itself  was a  treat.  But as I grew older the  fascination  waned. The adult in me was becoming  aware of the  patriarchal undertones of  celebrations  like  these. Don’t  get  me  wrong, I still like to have a  night out with my girlfriends, but  that  has more  to do with  my own  health and  happiness than the  menfolk in the family.  On second  thoughts they  might  welcome some  time  off  from me – so  there  – it is good for everyone 😉 .

The ladies  who observe  the  fast on this  day abstain from  rice  based  food and  usually  consume wheat porridge  and  thiruvathira puzhukku   along  with Koova Vilayichathu (Arrowroot Halva).  There are  a  few  regional variations for  these   dishes, but  some  form of  puzhukku and  Koova  are  found  all over  Kerala.  One  traditional  version  calls  for  the fire  roasting the   root  vegetables and mixing  it  with a sweetener and another  calls  for a savory spice mix. The  version that I am   familiar  with,  is  the  savory one.

Though my attitude  toward  the  celebration  has  changed, I still love root  vegetables  and  the  arrow root sweet. Root  vegetables  are a  healthy  source  of   nutrients   while being  light on calories.  They taste  delicious as well. What is  there not to like ?

Eight  different  kinds  of  vegetables (ettangadi – loosely translated  into   eight  things  from   the  market)   are used  in this   dish.   Many  of  the   tubers  are hard  to come  by outside of  Kerala.   Along  with the   tubers , plantains  and beans (cow peas,  horse gram , green  gram or a mix )  are  added.  All the vegetables are fire  roasted in  whole – with the skin on.  The  beans  are  roasted  and  cooked separately.  The peeled  roasted vegetables  and  the  cooked  beans  are  mixed  together with  the  coconut paste and  heated  through  before  serving.

In  contemporary  cooking  instead of fire  roasting, the  beans   and  the vegetables are pressure cooked  in separate batches  and mixed   with the  spiced  coconut paste.

For  me it  is not  easy to  get  all the  root  vegetables  – especially  the ones  I know  as nana kizhangu  and koorkka.  Nana Kizhangu is an  interesting  root   with   whiskers (for  lack of  a  better  word)  and tastes similar to colocasia (chembu in Malayalam), but  has a firmer  texture  and  sweet  aftertaste. Koorkka is  difficult to come  by  even   in other  parts  of   south India, but  I do find  taro roots  and  elephant  yams in the  Asian  stores.
Some  of  the  vegetables in the picture  are   sliced  and  frozen  versions. When  fresh ones are available  I prefer  using  those. 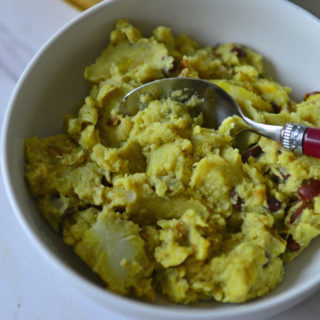 I came across your site searching for Arrowroot Ada recipe. Being a Christian, I have never had this puzhukku but heard about it from friends who makes this for Thiruvathira. Certainly going to try this authentic recipe. Love the way you narrate about the dish and the subtle sense of humour you have.

I absolutely love hearing from readers :-). There is still some 'mallu humor' left in my veins.