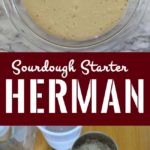 Herman is the sweet sourdough starter that can be used to in many different recipes – from cakes to bread to pancakes. Making Herman is a fun and rewarding experience. Try with kids for an even more wondrous experience!

Herman is a sweet sourdough starter that can be used to make bread, cakes, pancakes, English muffins and a variety of other yum goodies. Making a Herman starter requires only a few ingredients and is a good kitchen science experiment to do with little kids.

The Tradition of Friendship Bread

Bakers have been making and handing down starters for ages. One reason is that a mature starter has more distinct and complex flavors than a fresh starter. Starting out with a mature starter makes it easier to get that coveted sourdough flavor.

A pure wild yeast sourdough starter has just 2 ingredients – water and flour. When combined these two create the perfect breeding ground for wild yeast and certain bacteria. Over time with proper maintenance, this becomes the magic ingredient that makes your ordinary white bread into something exceptional.

Herman, on the other hand, is a sweet sourdough starter. There is active dry yeast, the commercially available yeast, which kick starts the fermentation. There is plenty of sugar, which provides enough food for the yeast, and finally, there is milk. I am guessing that the presence of milk is to provide lactobacilli, but I am no microbiologist.

The milk the starter will cause some concern to the food safety experts. But when properly maintained the acidity in the mixture will prevent harmful bacteria from taking hold in the mix. You could do a ph check, but I don’t.

I rely on my nose and eyes. A good starter should smell good – tangy to sweet depending on the acidity level. If it smells foul, into the trash it goes. Similarly, the starter should be white or off white, but never orange, red, blue, gree…… All these indicate the presence of mold or other bacteria taking hold. There are instances when you might want to grow these, but Herman is not one of them. Again into the trash, it goes.

The starter in the above picture looks off white – closer to yellow than white. This is because I use raw sugar and unbleached flour, and this is OK . But if it begins to turn orange or orangish red that is a sure sign that something has gone wrong.

Once you spot mold, discoloration or foul smell do not try to salvage the starter. Chances are the mold spores and the bacterium has already spread through the mix. It is time to seek out  Herman lovers – or go to the herman project . Those guys might be able to help you.

I was introduced to it by a friend, who was handed down a starter that she could not maintain any longer. The recipe was for ‘Amish Friendship Bread’. It was intriguing as the recipe called for taking care of the starter and distributing it to your friends. Kind of like a culinary chain letter.

At this point I have to confess – I did not do a good job of taking care of Herman. I did not like chain letters either!

The Name – Why Herman, Why Not Harry or William or Krishna

Bakers are odd people – if I may so. We love to nurture things that don’t talk back to us. And once we get attached to something we are it – Yes, my regular sourdough starter has a name too. But this guy is Herman, and yes it is HE.

So anyway someone named their sourdough starter Herman and it struck a chord with the recipients. Maybe the recipe that accompanied Herman was extra special – maybe there was a story that was handed down. Maybe it was just the simple idea of creating your own Herman story.

Note: Scroll down to the comments – one reader has kindly shared the origin behind the name

There are plenty of Herman recipes. The ingredients and method are pretty much the same. Quite often these recipes come with this warning “DO NOT USE METAL SPOON”! I remember this warning when I got my first starter.

These recipes were handed down generations to generations. A properly cared for Herman can live to be centuries old. Quite possibly when the recipes were first perfected and handed down the metal utensils would have been of the reactive/corrosive variety. These would have interfered with the acidity of the starter and the chemical reactions would have leached aluminum compounds (or whatever were used at that time) into the starter. Hence the warning.

Fortunately most cookware today are not reactive. I make my sourdough dough in the KA steel bowl and many of us who regularly make no-knead bread let the dough slow rise in a metal bowl for days – with no adverse effects. So I guess the key is “USE NON REACTIVE UTENSILS”.

Another thing that the recipes used to say is “Do not refrigerate”. From a food safety standpoint, refrigeration is advisable, but not always needed. Read on …

Storage – Into the Fridge or Not

That depends on where you live or what the weather is like. If it is warm say the mid 70s or more refrigerate Herman an hour or two after feeding. This has given it enough time to get active. If the room temperature is cold say less than 70 it is pretty safe to leave it outside. In any case, once the starter is bubbling vigorously transfer to the fridge to keep it healthy. If you choose to leave it at room temperature, check on it every day just to make sure.

One of the most popular recipes to make with Herman starter is the Amish friendship bread. But here are two other recipes for you to be excited about – Sourdough Pancakes and Herman Cake.

Most recipes ask you to check and stir Herman every day. It will not ruin the starter if you don’t do it every day, especially if it is refrigerated. When not stirred daily there is a chance for the flour portion of the starter to coalesce. Eventually the liquid begins to separate. It is not a big issue as with a bit of elbow grease the solids can be stirred back into the liquids. The regular stirring prevents some of the separations. It is also a fun way to keep the bubbling in check.

This is a great activity for elementary to middle school kids. It is a good way to introduce food safety principles to ph values. Here are a few ideas

Even without a planned activity making Herman starter can be an interesting project for kids. Bake the Herman Cake as a reward. 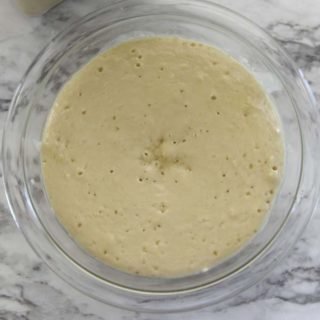 By Syama
This is the sweet sourdough starter used to make friendship breads, cakes and many other baked and fried treats. It is a hybrid starter as it uses active dry yeast to start the ball rolling. It is a little sweeter than usual sourdough starters and makes excellent breakfast toasts.
4.80 from 5 votes
Print Recipe Pin Recipe

Making the Starter Base

Those who grew up with cultured foods would find safety concerns a bit absurd, but starters can pose a health hazard when not taken care of properly. Fortunately, most health concerns, though not taste concerns, are alleviated by cooking foods to the proper internal temperatures. Here are a few things to keep you healthy and the starter thriving.

Does Herman HAVE to go in the fridge daily? Can he live on the counter?

@martha It depends on the room temperature. Refrigeration prevents over fermentation and avoid contamination

Love this cake but have a dairy intolerant granddaughter. Will it still work if I use a plant based milk (oat, almond, soy) when feeding? Thanks.

Would it be possible to use just regular sourdough starter and when feeding add sugar and milk instead of the usual flour and water? And wait the prescribed 5 days and feed again?

Yes it is possible, but the starter consistency will vary based on the recipe.

How do you reactivate the dried starter?

Just use a little bit of the fried started in in place of the flour and follow the steps to create a sourdough starter. It will create a bubbling starter faster. Crumble up dried starter into as small pieces as possible.

Hi I've been given the Herman the German Friendship cake starter and wondered if I cook 1 part, pass two on then keep one do I just need to keep stiring to keep it alive? Or should I regularly add something? The recipe states every 3/4 days to add 1 cup flour/milk & sugar. That's quite a lot to keep adding. I'm not wanting to bake again for a while so if there a way to maintain the sourdough until I want to use it again? Thanks in advance.

To maintain a healthy starter you have to feed it. Since you do not want to bake for sometime you can either maintain a low quantity of starter, say instead of 1C use 1/4 C. When you do this just remember to divide all ingredients by the same number. Another option is to dry some starter. Spread a little starter evenly on a parchment paper and let it dry on the counter or in the oven (do not heat the oven) with the light on. Use the dried starter as part of your flour and reconstitute using the feeding schedule you have. Hope it helps, - Syama.