Turmeric  Latte is  all the  rage  now,  just like  quinoa   and  flax  seeds  were a  few  years  back. Turmeric has  a  lot of  medicinal properties  coupled  with its  ability to brighten  everything.  In Indian culture  turmeric has a place  everywhere  from  medicine  to  religion  to  cooking. If that is not  enough, the plant is  pretty  enough to  be  blend  in  with  the  ornamental plants in the  front  yard. 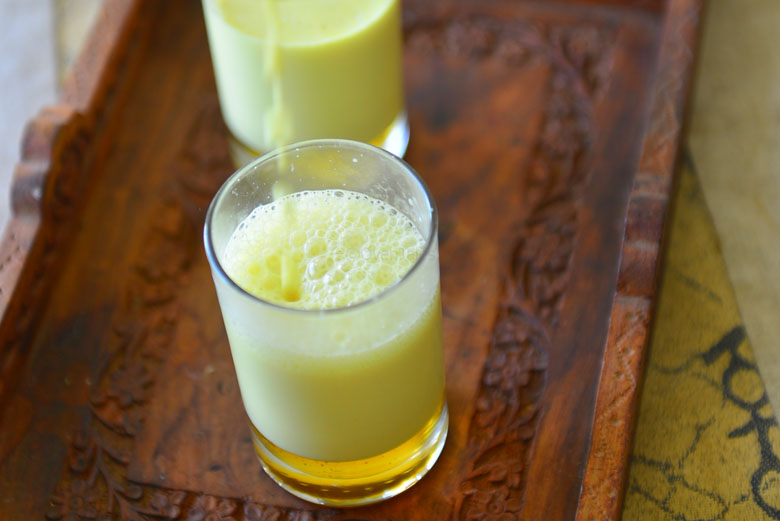 But why am I talking  about  turmeric  milk or  haldi ka  doodh  today ?  Well, this  past  week one  after  other   all of  us  in the  family were  falling  sick . Not totally unexpected  as  the  schools  have  reopened  and  the germ  sharing  has  resumed in earnest.  Kids  and  cold viruses  have  a  natural affinity for  each other.   It  was  the  same in  my childhood as  well.  Someone  sneezes near me  and  the  released  cold virus  goes “Yipee, there is  Syama, I heard  she is an  awesome  host …  lets hurry!!”.

Drink Manjal Pal or  turmeric  milk , I was  told  by friends  and  family.  This was  a  popular  home  remedy to  ward of   the  evils of  the  season.  As a  child I  was  not  very fond of  milk,   not  to mention milk  with  turmeric  and  pepper!   A  few spices  and a  dash of  honey  changes  the  story,  making it a  delicious  way to  attack the upper  respiratory ailments . This  sweet  aromatic  version  is  something that  even   the  pickiest  eater  in my family  approves of. 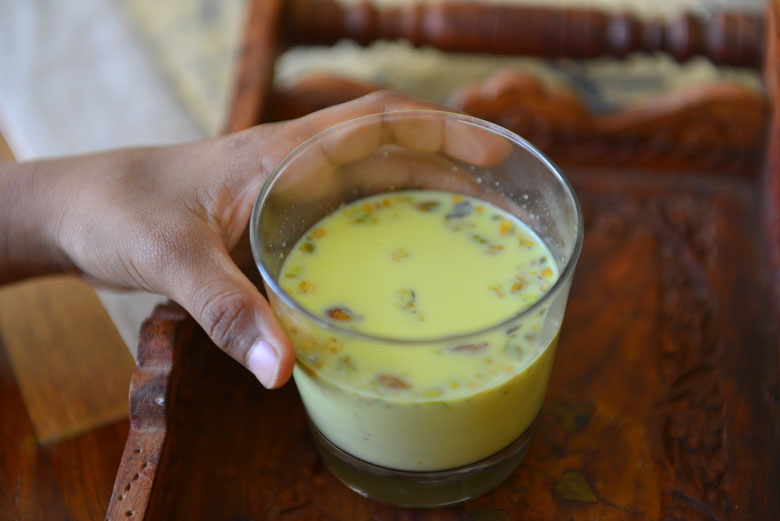 Here is my little  guy  reaching for his  glass  of  turmeric milk.  One of our  favorite additions to this  golden  milk is  crushed pistachios.  These crushed nuts  provide a nice visual and  textual contrast.  You  don’t need  to drink a  lot of  this  every day ,  just  half a  glass per day during the  clod  and flu  season  is  all that it  takes to boost immunity.

A word of  caution –  I have  seen  recipes  that  call for  1 tbsp of  turmeric powder  per  cup of  milk. To me  it feels  like an  overkill.  Turmeric is considered very potent,  filled  with  many health  benefits , and  taking  large  amounts on a  day to day basis  may cause  unwanted side effects.  How can  this  be  when  Indians use  turmeric  everyday, you ask ?  Yes it  is true that turmeric is used  in everyday Indian  cooking, but  the  amounts  used  will be much less than  1  tbsp  per  person.

The  traditional  version  has  two  must  have  ingredients  to be  added to milk – turmeric  and  pepper.   Turmeric  contains  curcumin ,  which  is a  potent  ingredient – anti microbial,  anti fungal, anti inflammatory and  the list  goes on. Pepper is credited  with  aiding  the  absorption of  curcumin.   To this  basic  recipe  other spices  according  to  individual  taste  preferences  are  added.   I add  cardamom, cloves,  cinnamon  and  ginger, all of   which have  anti inflammatory, digestive  and  anti microbial properties  in addition to  being powerful  anti oxidants. 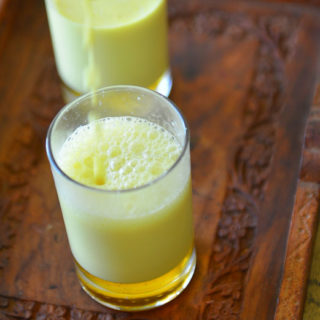 By Syama
Turmeric is  known for its healing properties.  This  milk  is infused  with  turmeric   and   the  added  spices  aid  digestion and  add  more  flavor  to it  making it an irresistible   drink.
No ratings yet
Print Recipe Pin Recipe
Cook Time 5 mins
Total Time 10 mins
Course Drinks
Cuisine India
Servings 2

I love the taste of turmeric milk. Thanks for sharing its easiest & tasty recipe!

Glad you liked it !

I always hear about turmeric milk but I haven't tried it yet. I can't wait to make it!

Try it :-) it is delicious and believed to be healing

I've heard so many good things about Turmeric Milk, but for some reason I haven't gotten around to trying it. I'm saving this recipe, and will definitely be making it as soon as I get to the grocery store this weekend.

I make this all the time. So good!!