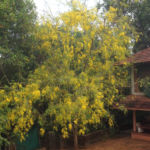 My last few posts have been about food related to Vishu celebrations. For the people of Kerala Vishu is the new year according to the traditional calendar – Kollavarsham. It is the year 1193 (2018 CE) according to this calendar. Just to be clear on Vishu it does not turn to year 1194. Confused yet?

Kollavarrsham follows a solar calendar – to be fair it is a little more complicated than that. This calendar is organized differently compared to the Gregorian calendar. There are 12 months in a year, but the moths follow the signs of the Zodiac. On Vishu the sun moves into the house of Aries and it is considered to be the start of a new year.

This occurs on the first day of the month Medam and usually falls on the 14th of April in the Gregorian calendar. If the sun’s transition to Aries occurs late in the day the celebrations will be on the 15th. The month Medam is the 9th month of the year and yes, we celebrate new year in the 9th month.

No, we are not alone in celebrating new year at this time! To put it in perspective, the latest revision of Gregorian calendar is less than 500 years old whereas we have been celebrating this for over 1000 years. This solar new year is celebrated in many other parts of Asia as well. In North India it is Baisakhi , in Myanmar it is Thingyan , in Combodia it is Choul Chnam Thmey, in Srilanka it is Aluth Avurudda. There are many others that I am unaware of ..

In a country with as rich literature and oral traditions as India, one can find stories that tie almost anything in the cultural fabric to its mythology. Here are the two stories I have come across. One story is that Vishu is when Narakasura , a demon was vanquished. Thus ending carnage and ushering in a new dawn of peace and growth. Yes, it is the same legend as in Diwali. The second story points to Ramayana. Ravana, the Demon King of Ramayana, was powerful enough to control Surya, the sun god. Throughout his reign Ravana never allowed Surya to rise from true East. No, these two were not able to amicably resolve their differences. Lord Surya had to wait for Ravana’s death before he could resume his original course!

These stories seem a bit odd to me as someone who grew up celebrating Vishu as new year. Obviously Krishna could not have killed Narakasura on 2 different dates, or could he? Could it be as simple as following a different calendar? Or could it be a case of a dominant culture co-opting another culture’s traditions? At any rate for a vast majority of us the core of this festival did not lie in religion and mythology but in the celebration of the bond between man and nature.

Vishukani is typically a Hindu tradition, other than that I can not recall any other religious significance to this festival. Temples celebrate Vishu and present a kani for the devotees, but most celebrate it at homes. It is a seasonal festival, an occasion when farmers get ready for the next season. “Time to get the seeds under the ground” as the old timers put it. There is even a tradition of ceremonial ploughing of the field in some parts of Kerala.

This is the season when Kani Konna (The Golden Shower Tree in the picture) is in full bloom. It is similar to the cherry blossoms in season – all adorned with flowers with very few, if at all any, leaves. The color of this flower – yellow (gold) – is a symbol of prosperity and features heavily in Vishu celebrations.

For kids, it is the summer break! The text books are forgotten and everyone is in a more relaxed mood. The heat is still bearable, the final exam results won’t be released for another month and everything is fine with the world! Plenty of sweet mangoes and jackfruits to go around, and enough time to spare… that is the Vishu I remember.

Vishu is a family celebration. The most important part of Vishu is Vishukkanni. It is the first thing that you see in the morning, it has to be bright, cheerful and auspicious. The bright yellow Golden Shower flowers (Kani Konna) are one of the most important part of Vishu Kani. In villages and small towns if you happen to own a tree and it is in bloom chances are that you are popular guy at least once a year! Trust me when I say this – we can and will jump over fences and face other obstacles if you have a tree in bloom and are not willing to share! Luckily in many big cities these flowers will be available in the markets the day before Vishu – dramatically decreasing the incidents of vandalism😉

The Kani is placed in a common space in the house. It will be set on a large tray or similar piled with fresh fruits, flowers, gold , silver, money, mirror and sometimes idols of Krishna and other gods. Kani konna flowers, vellari (a kind of cucumber), Kasavu mundu (traditional clothing with golden embroidery), gold mirror and lamps are all important part of the kani. It is set facing east and you see your reflection in the mirror surrounded by signs of prosperity. The goal for the year is to bring that reflection in the mirror, the wonder, the prosperity and the brightness, to reality. The belief is that this image is going to be the harbinger of prosperity and longevity.

Usually the lady of the house prepares the Kani the previous night, lights it in the morning and guides the rest of the family to it. In my family, mom used to light the kani and wake up dad. It was his job to lead us to the Kani and give us Kaineettam. I remember squeezing my eyes shut and covering it with hands as an added insurance to make sure that I don’t accidentally see anything else on the way. After Kani comes the most important part – Vishu kaineettam. The elders of the family give the youngsters money, no strings attached. If there is ever a sure way to keep a tradition alive, this is it!

I remember one Vishu that I and my toddler had spent with my husband’s parents. It was my baby’s first Vishu and MIL made sure that he did not miss the kani. She set everything up in a small uruli (shallow brass vessel), and brought it up to our room. The little guy was fascinated by the bright lights and colors and happily reached for the kaineettam, and it still goes on.

In many families there is a tradition of giving Vishukaineettam to small kids and others in the neighborhoods well. This goes on till day 10 or pathamudayam (10th day break). No, you don’t have to give the money to the same person multiple times, but if you plan on getting some make sure you are there to claim it by the 10th day.

It is not just about money, but food and firecrackers feature prominently in the festivities as well. Many families start the day with Vishu Kanji, and an elaborate feast for lunch. Unlike Onam the feast is not necessarily vegetarian. Since it is a season of fresh fruits like jackfruits and mangoes dishes featuring these are also a big part of the feast.

CHECK OUT THESE SADYA RECIPES  …